I am in the middle of a project with a client – a project to improve their time usage registration procedures. They had been looking at several commercial solutions – all requiring customizations – most of them costing “an arm and a leg”.

They actually started a project with one vendor who thought they could deliver, but apparently forgot to listen for client needs and forgot to set client expectations correctly – the project ran for six months and finally they had to retreat and stop the project in progress because they could not deliver. 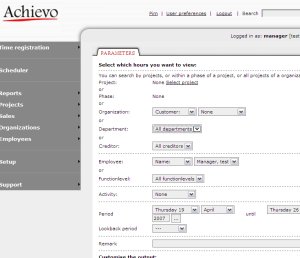 I got a second chance to present my idea which is now running and in further development. It is based on the Open Source project Achievo, originally developed and opened up by the cool guys at iBuildings in the Netherlands.

The advancements of the processes around time registration and tracking is usually “evolutionary” for companies like my client. They know they need to register time in order to bill the client at the end of the month. In this case, the consultants would initially share an Excel sheet in which they would register their hours. It worked, but apart from being limited to only one person entering hourly usage at a time, it was very difficult to verify that everybody had remembered to register all billable hours. And that may or may not be quite expensive in the end – they actually didn’t know.

Achievo is based on modules and it has a billing module which I guess is used by more or less anyone running the system. It will be included as a standard module in the next release. My main task has been to integrate with my clients CRM system (regularly import customers and create dummy projects for them). Also I created a few reports to ease the actual billing, as my client cannot use the billing module as-is. They have a somewhat special price matrix, which I needed to get Achievo in tune with. It was also necessary to build some tidbits that would enable handling of prepaying clients bying a predefined number of hours at special rates. I hope that I will dig up some time to feed some business process documentation and project templates back to the Achievo community.

Achievo runs on a LAMP stack (Linux, Apache, MySQL and PHP). Check out the demo sites running version 1.2.1 (the current release) and the nightly builds for the upcoming version 1.3. My one-man company can use Achievo 100% as is. My client – a 25 person consultancy firm – has been running Achievo since the beginning of this year and we are just now entering phase two, where we will add quite a few more “need” and “nice” features.

This site uses Akismet to reduce spam. Learn how your comment data is processed.